The Ford Fiesta has come of age. Jonathan Crouch takes a look at the much improved seventh generation version.

Ford's Fiesta has always been affordable and great to drive. But state of the art? It's that too in its current seventh generation form. Beneath the smart styling lies some clever user-friendly technology - and cabin quality that'll make down-sizing into one of these less of a chore. This is how you right a best seller.

This Fiesta may still be a small car but these days, it thinks big in almost every way, starting with styling designed to make more of a statement in the supermini segment. Under the bonnet lies an impressively clean and frugal range of petrol and diesel units, which includes the brand's latest mild hybrid EcoBoost Hybrid tech. Plus there's a more up-market cabin than you might be used to from a Fiesta, plus safety technology that can automatically brake the car for you, even at night.

Ford has also broadened the appeal of the range with an 'Active' Crossover bodystyle, plus variants more specifically aimed at customers wanting luxury and sportiness. And as well as all that, the brand reckon that it'll be even more fun to drive than its predecessor. This is, in short, on paper at least, a thoroughly well thought out piece of supermini design. But will it be enough to keep Ford at the top of the sales charts? Let's find out.

Variations on the Fiesta theme may come and go but before driving any version of Ford's definitive supermini, there's one thing you almost always know for certain: that it'll be a great steer. This current generation model is 15% stiffer than its predecessor and both front and rear track measurements are wider. The engineers tell us that the chassis offers 10% more cornering grip, supported by Electronic Torque Vectoring Control, which enhances the driving experience by applying a small amount of braking to inside wheels to assist traction and stability when cornering. Braking distances at 62mph are reduced by more than 8%. There are freshly developed five and six-speed manual gearboxes. And rear disc brakes feature on models with engines developing more than 100PS.

Ah yes, engines: you'll want to know about those. Ford is gradually introducing its mild hybrid 48-volt tech into this car but for the time being, the conventional engine choices also remain, which means that the range kicks off with the brand's 1.1-litre Ti-VCT 75PS unit which comes only with a 5-speed manual gearbox. Nearly all Fiesta buyers though, opt for the three cylinder 1.0-litre EcoBoost turbo petrol engine though, usually in base 95PS form (it's 100PS if you specify the optional auto gearbox). There's also an uprated 125PS version of this same engine. The 1.0T EcoBoost powerplant can also be had in mild hybrid mHEV 'EcoBoost Hybrid' form in 125 and 155PS forms, complete with Ford's latest 48V electrified technology. The minority-interest 1.5-litre TDCi 85PS diesel unit continues too. The SUV-style 'Active' Fiesta variants share all the usual mainstream engines, but the top Fiesta ST hot hatch model gets its own 1.5-litre EcoBoost petrol unit developing 200PS.

If you go by the maxim that if something looks right, it is right, then you'll probably like the look of this seventh generation Fiesta. As before, it's offered in both three and five-door bodystyles, plus an estate and all three variants are tidy pieces of styling with evolutionary styling and a bolder, wider front grille. The side profile is more settled and less wedge-shaped than previous generation models, combining with 71mm of additional body length and 12mm of additional width to give what Ford hopes is a longer and more premium appearance.

Inside, it's completely different from what went before. Gone is the previous button-heavy fascia with its cheap plastics. In fact, the number of buttons on the centre console has been reduced by almost half, with many connectivity and entertainment controls relocated to a freshly developed 'SYNC3' 8-inch touchscreen. A semi-translucent piano black insert stretches all the way from the instrument binnacle to the centre console, giving the cabin a touch of class. Rear seat passengers benefit from 16mm more knee room, supported by new slim-back seats that are softer, and offer greater side-to-side support. This Fiesta's tailgate is wider for easier access to the boot, and improved storage for personal belongings is delivered with a 20% larger glovebox and a 1-litre media bin in the centre console.

Whatever your choice, you'll be offered some up-scale equipment options, examples including an openable panoramic glass roof. There's sophisticated safety too, including a Pedestrian Detection system that can even prevent collisions at night. And 'Active Park Assist' with brake interventions to prevent low-speed collisions when parking hands-free. As for standard equipment, even base models get features like air conditioning, Bluetooth, an 'Emergency Assistance' system and a 6-speaker stereo.

The Ford Fiesta has garnered a reputation for being one of the cheapest superminis to run and this continues. In fact what's remarkable about this improved range is how so many models go below 100g/km. It's now the exception where you find a variant in this line-up that puts out more than the ton.

Take the volume 95PS 1.0 EcoBoost petrol unit, which puts out 116g/km of WLTP-rated CO2 and manages a WLTP-rated combined cycle fuel return of 55.4mpg. That's actually better than the entry-level 1.1-litre Ti-VCT petrol unit (which manages 121g/km and 53.3mpg). In mHEV mild hybrid form, the 1.0-litre EcoBoost unit gets a lower compression ratio and a larger turbo and can be had in 125 and 155PS electrified guises. Plus the mHEV version has been embellished by a beefed-up starter/generator driven by a belt at the front of the engine that stores the energy harvested when you brake or decelerate in a tiny 48-volt lithium-ion battery secreted at the back of the car. The 125PS EcoBoost Hybrid variant manages up to 58.9mpg and 109g/km.

For the 1.5 TDCi diesel, the figures are 112g/km and 65.7mpg. An Eco button for manual transmissions adjusts engine and throttle settings to help drivers save even more fuel when desired. Underbody aero shielding further reduces aero drag.

As for the warranty, well like all Fords, this one comes with a 36-month 60,000-mile package that also includes one year of Europe-wide breakdown assistance. On top of that, there's an anti-corrosion guarantee for 12 years. Ford also offers the chance to extend this cover - to either four years and 80,000 miles or five years and 100,000 miles.

The Ford Fiesta has always been a vehicle the British public has warmed to but the truth is that before this seventh generation model arrived, supermini buyers chose this car either because it was great to drive or because they'd been offered a deal too good to turn down: there wasn't really another reason to buy one. This MK7 version has changed all that, smarter to look at, smarter to sit in, smarter to operate and smarter under the bonnet.

A smarter choice all round then? Many will think so. This still may not be the largest or the plushest car in the supermini sector but on just about every other main criteria, it's either up there or class-leading. There's an unpretentious quality to it and a focus on providing the things that really matter to small car buyers - the fun handling and affordable technology Ford has long delivered to them in this segment but also the low running costs, strong safety provision and low emissions they now need too. And it's all been done with a polish and self belief that we've never seen from a Fiesta before. In short, this is, more than ever, a small car that supermini buyers simply can't ignore. 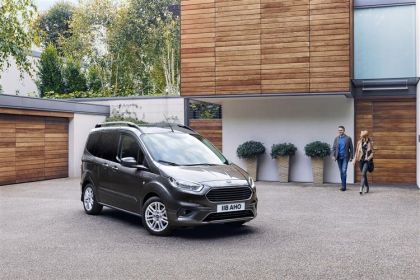