MIND YOUR E'S and Q'S

Jaguar's E-PACE brings the company's brand values into the growing market for compact, lifestyle-orientated SUVs. Sporty cues are borrowed from the Coventry maker's F-TYPE sportscar and the proven underpinnings hail from the successful Range Rover Evoque. All the ingredients seem to be in place then, for a strong package.

Jaguar is getting serious about its SUVs. First there was the F-PACE, which now out-sells all the company's other models combined. That car targeted models like BMW's X3 and Audi's Q5. Now, we have the slightly smaller E-PACE, a five-seat compact SUV aimed at contenders in the class below, models like the BMW X1 and the Audi Q3. The name suggests this model to be electrically-powered: it's not. Battery propulsion is being left to the I-PACE model.

Under the skin, the E-PACE shares most of its engineering with the Range Rover Evoque and the Land Rover Discovery Sport but has a longer wheelbase stretched to 2,681mm. That said, the Coventry brand is keen to emphasise that this case has very much a Jaguar feel. It's certainly far more of a driver's car than its Solihull cousins thanks to things like 'Configurable Dynamics' technology that lets drivers personalise throttle, steering and transmission settings, plus the 'Active Driveline' and torque vectoring set-ups are supposed to combine to make this front-driven model fell more like a more involving rear-driven product.

Buyers get a choice of either front or four wheel drive and choose from a range of 2.0-litre Ingenium four cylinder petrol or diesel engines mated to either manual or nine-speed auto gearboxes. Most will be selecting one of the diesel, available in 150PS, 180PS or 240PS outputs. There's also a pair of petrol turbo engines with 249PS or 300PS. Green pump-fuelled E-PACE derivatives only come with auto transmission and AWD. The pokiest 300PS petrol E-PACE variant will get from 0-62mph in just 5.9 seconds. All models get a 'JaguarDrive Control' system that gives owners a choice of four selectable driving modes - 'Normal', 'Dynamic', 'ECO' and 'Rain, Ice & Snow'. The optional 'Active Driveline' AWD system can transfer traction to the rear axle in a fraction of a second should a lack of grip demand it.

The E-Pace is based on the same chassis used for the Range Rover Evoque and the Land Rover Discovery Sport. It's around 4.4m in length, so very similar in size to the Audi Q3 that many think will be its biggest rival. It's certainly a lower, sleeker design than that Ingolstadt model, with crisp surfacing, strong rear haunches and a sporty stance. There's nothing like the same level of aluminium in the body structure as you'll find in this model's F-PACE SUV stablemate, but this material does feature in the bonnet and side panels and this, plus lightweight suspension components, has helped to keep weight down to as little as 1,700kg.

Inside, the cabin has more in common with Jaguar's F-TYPE sportscar than its F-PACE SUV cousin: there's a 360-degree grab handle for the passenger on the side of the centre console, just as in the F-TYPE, though the dash itself is arguably more futuristic. Instead of Jaguar's rising rotary gear selector, as on the F-PACE, there's a sports stick shifter. All models get a 10.2-inch centre-dash touchscreen for the infotainment system and there's the option of a 12.3-inch TFT digital instrument panel to replace conventional dials, plus you can also order a head-up display. The boot is a spacious 577-litres in size, thanks to the integral link suspension system chosen for the rear. That's also enabled the cargo floor to be low and the opening wide.

And of course the E-PACE features the very latest safety and driver assistance technologies. A stereo camera underpins the advanced Emergency Braking system, which also provides pedestrian detection, and supports the Lane Keep Assist, Traffic Sign Recognition, Adaptive Speed Limiter and Driver Condition Monitor features. Front and Rear Parking Aids are standard on every variant. The camera also combines with the electric power assisted steering system to deliver a Blind Spot Assist function to help reduce the risk of sideswipe collisions on multi-lane roads. A Forward Traffic Detection system also warns drivers of approaching vehicles at junctions where visibility is restricted. Advanced active safety features include a pedestrian airbag, which deploys from beneath the trailing edge of the bonnet to enhance pedestrian protection in the event of a collision.

Because the weight of an E-PACE isn't much different from that of its larger F-PACE stablemate and many of the engines are shared, it's no surprise to find that the efficiency figures don't vary much between these two models either. A base E-PACE 2.0 D150 diesel 2WD manual model can manage 60.1mg on the combined cycle and 124g/km of CO2. Add in AWD and the figures will be 54.3mpg and 137g/km, whether you opt for this engine with 150 or 180PS. The petrol versions don't do too badly either. A 2.0 P250 AWD auto variant manages 36.7mpg and 174g/km of CO2. With the top P300 AWD auto, you're looking at 35.3mpg and 181g/km.

A three year unlimited mileage warranty is standard with the E-PACE, although this can be extended with a number a couple of different plans that include a cover for an MOT test failure up to £750, as well as the normal cover for most electrical and mechanical systems. Service intervals are every two years/21,000 miles.

It says much about the success that Jaguar has had with its F-PACE that few eyebrows will be raised at the thought of another SUV from the Coventry company. And this one promises to sell in even greater numbers, thanks to a slightly lower asking price and sportier looks.

At first glance, it's tempting to pigeonhole this car as simply a smaller version of its F-PACE stablemate. In fact, it's quite a different product; less unique perhaps but still exactly what many potential buyers will be looking for in this segment. 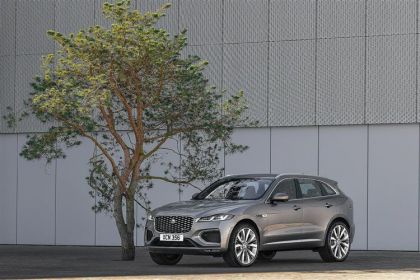 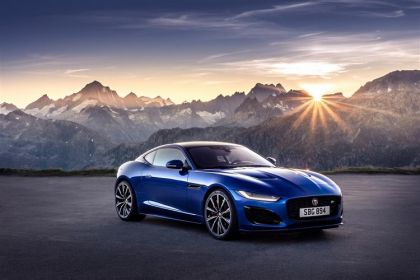