If you think the big three prestigious German brands have the Executive car segment sewn- up, a drive in Jaguar's second generation XF may be enough to make you reconsider. Even in the face of tough competition from rivals like the BMW 5 Series, the Mercedes E-Class and the Audi A6, this car offers a compelling range of virtues, more spacious than before and with greater levels of quality and connectivity. Perhaps most significantly, this MK2 model's aluminium-intensive architecture provides for weight savings that have delivered sharper handling and class-leading efficiency from this volume 2.2-litre Diesel variant. In short, it's a very complete package.

So to the second generation Jaguar XF. It might not look very different, yet a styling evolution hides a product revolution, this MK2 model lighter, more efficient and packed with technology at its launch in the Autumn of 2015, an improvement on its predecessor in every possible respect. Slightly more compact dimensions disguise a longer wheelbase that's allowed the hi-tech aluminium-intensive architecture to clothe a much more spacious cabin, especially for rear seat folk.

What hasn't changed is the XF's remit as a more sporting, dynamic choice in the full-sized Executive segment. To put that in competitive context, it's more BMW 5 Series than Audi A6 or Mercedes E-Class, though buyers of all three of these cars should be tempted by this model's cutting-edge cabin technology and the class-leading efficiency figures of the 2.2-litre Diesel variant we tried.

On the move, the weight savings achieved in the design of this second generation model quickly make themselves felt, with sharp corner turn-in aided by a responsive electric power steering system, a much stiffer body and standard torque vectoring that eliminates understeer and keeps you on your chosen line. A 'JaguarDrive Control' driving modes system offers you 'Eco', 'Normal' and 'Dynamic' settings that tweak throttle response, steering feel and gearchange timings, depending on the way you want to drive, plus there's a 'Winter' mode which on automatic models includes an 'All-Surface Progress' set-up for easier take-off on slippery surfaces. If you want adaptive damping too, you can get it via an optional 'Adaptive Dynamics' system.

Engine-wise, most buyers will want the '2.0-litre i4' 'Ingenium'-series four cylinder diesel powerplant, offered in either 163PS or 180PS guises. The lower-powered variant offers class-leading supermini-style efficiency figures but has less torque than the pokier 180PS derivative we tried, a car that makes 62mph in 8.1s en route to 136mph. There's a choice of either six-speed manual transmission (a first for XF buyers) or the 8-speed auto 'box that most will want.

From almost any angle, you'd know this was a Jaguar. You'd know this was an XF. It's a very different one though, in ways you simply won't appreciate if all you offer this car is a cursory glance. The sweeping coupe-like profile that defined the original model has evolved, the roofline lower, the rear deck longer and higher. There's a choice of saloon or Sportbrake bodystyles.

The interior has come in for a rethink and Jaguar has worked to retain the same strong horizontal lines of the original XF fascia but render them in higher quality materials with a more mature design ethos. The layered instrument panel, now with Jaguar signature 'Riva Hoop' inspired by XJ, continues into the door, creating a unique cabin feel. The doors offer an optional soft-close function, and there's plenty of natural light flooding the cabin. If you want more, you can specify a panoramic sunroof. The rear bench also features a more practical 40:20:40 split, making it easier to through-load bulky items such as skis. The boot has the option of a power close function.

It seems strange to remember now that the original version of this XF was launched without the thing that most Executive segment buyers actually want - a four cylinder diesel engine. Even when Jaguar finally put that omission right with the facelifted MK1 model in 2011, the range still lacked key elements like an estate bodystyle and a manual gearbox option. These days though, the brand is at last getting fundamental things like this right. They've certainly got the idea when it comes to the importance of a four cylinder diesel, the MK2 model saloon line-up we're looking at here fundamentally built around what Jaguar calls '2.0-litre i4' power, a new-generation Ingenium series diesel unit offered in 163PS or 180PS guises and priced across three trim levels in the £32,000 to £40,000 bracket. Many will want the pokier version we tried, given that the premium for it is only £500.

I mentioned a manual gearbox: for the first time in an XF, you can now have one, though by the same token, this also means that for the first time in an XF, you have to pay a premium for auto transmission, a not insignificant £1,750 - which will leave most buyers having to think in terms of this being a £35,000 to £40,000 car. But then maybe it should be, given that the smaller BMW 3 Series-sized Jaguar XE starts at around £30,000. If you think this sounds as if Jaguar's priced its two mainstream models rather closely, then we'd agree. Proof of that is delivered by the fact that at range entry-level, in like-for-like spec, the difference to trade up from an XE to an identically-engined and equipped XF can be as little as £1,500: we know which we'd choose and suspect a significant number of business buyers will also prefer to opt for this larger car.

Just how class-competitively efficient could an XF really be if it didn't have to rely on old-fashioned Ford-derived underpinnings and engineware? This second generation model at last gives us the answer to that question, using Jaguar's industry-leading expertise in lightweight aluminium construction and a freshly-developed range of 'Ingenium'-series four cylinder diesel powerplants to set new running cost standards in the full-sized Executive segment.

It seems almost unbelievable that the 2.2-litre Diesel version of this car opens with a supermini-style 104g/km emissions figure, but there it is. Step up to the 180PS variant and you'll still only see 109g/km - leading to an identical taxation banding. Go for an entry-level manual car and you'll manage 71.7mpg.

Lighter, more spacious, better-looking and a whole lot more efficient, this car will worry the German makers more than any model Jaguar has brought us so far. But then perhaps we should have expected that based on the company's recent near-flawless record under Indian ownership. Investment from TATA goes in: excellent cars come out. It seems to be as simple as that.

Are there issues? A few. The range of variants on offer still isn't as wide as you'll find elsewhere. And we wonder what effect this car will have on sales of its smaller XE stablemate, given that volume versions of the two models are so similarly priced. Ultimately though, what's so masterful about this second generation XF is how cleverly Jaguar has kept and built upon what was good about the original version, while being realistic about where the old car's weaknesses were. As a result, you now really can have a beautiful Executive class car that offers cutting-edge technology and a dynamic driving experience but which is also built in Britain and sips fuel like a supermini. These truly are amazing times. 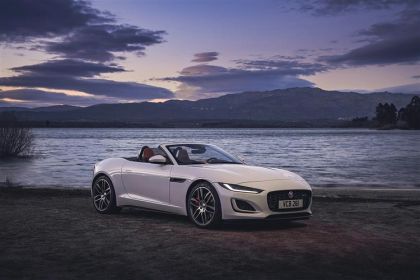