The Kadjar is Renault's first credible family-sized Crossover model and you have to have it in Blue dCi 150 form if you want it with 4WD. That's the engine Jonathan Crouch looks at here.

Renault's Kadjar is a family-sized SUV Crossover model that's smart, sensible and, in its way, quite aspirational. Developed from much of the same technology that brought us the segment-leading Nissan Qashqai, it's certainly a more interesting family choice than that Focus-class hatch you might have been considering and, in top Blue dCi 150 diesel guise, there's the option of 4WD if you want some substance to go with the style.

For a long time, Renault was never able to offer us a class-competitive family-sized Crossover model. Here's the car that has put that right, the Kadjar.

At first glance, many dismissed this car merely as a Nissan Qashqai with a Renault re-style but there's much more to this Crossover than that. Though the two vehicles do share 60% of their parts, Renault claims that 95% of what you see and feel in a Kadjar is completely new. It's certainly sharply styled and is able to offer a bigger boot than its Nissan counterpart. There's more affordable pricing too, especially when it comes to more powerful engines and the option of four wheel drive. Sounds promising doesn't it? Time to put this car to the test in Blue dCi 150 diesel form.

This, we're told, is the 'ultimate urban adventurer'. It certainly a good indicator as to just how far this class of car has come. Larger Crossovers have always been lighter and less clunky than proper SUVs but they've still tended to be a little compromised in comparison to the conventional family hatchbacks they're usually based upon. This one irons away many of these issues.

Like all the best family SUV Crossover models, this Kadjar requires very little acclimatisation once you set off behind the wheel. Unless you really start to throw the thing around, you'll find that it handles just like any ordinary family hatchback and rides probably better than most of them. If you want responsive power on tap - or the option of 4WD - then you'll need to stretch to the top Blue dCi 150 diesel unit that we're testing here. This puts out a useful 320Nm of torque and makes 62mph from rest in about 10s en route to nearly 120mph. Those are figures that slightly deteriorate if you opt for this variant with 4WD, but the extra tractional benefits of an all-wheel-driven version will be well worth having in the winter months. This is one of those on-demand set-ups that can transfer up to 50% of power rearwards should a loss of traction demand it.

So. What do we have here? A Nissan Qashqai with a Renault re-style? Or something more? The Kadjar certainly shares much with its Japanese design stablemate, primarily its 'CMF' 'Common Module Family' platform and most of its engine technology. Many though, will think this to be a more sleekly-styled car and it's certainly a more practical one, with a rear overhang lengthened to deal with the Qashqai's biggest problem, a lack of bootspace. The result is an appealing package that at first glance, seems to deliver everything that a modern Crossover of this kind should offer.

Unlike you happen to be a Renault sales person or an owner of the original version of this car, you'll struggle to notice any changes made to the exterior. So, as before, the Kadjar looks like a scaled-up version of Renault's smaller Captur SUV - which is no bad thing. Of more importance is the news that the interior of this car has been treated to a much-needed re-fettling. The fascia has been given a new 7.0-inch centre-dash touchscreen that's a big improvement on what was offered before. There are smarter instrument cluster displays too. Otherwise, things are much as before. It's slightly more spacious in the back than a Qashqai. And the boot is a useful 42-litres bigger than that Nissan's, measuring in at 472-litres to the tonneau cover. You get handles that drop the rear seats in their 60/40 split, an organiser that prevents your shopping spilling all over the boot when you corner and a split level load floor. There's also 30-litres of oddments storage around the cabin and the front passenger seat can even be folded to use as an impromptu table.

Safety-wise, there's a 'Visio Pack' which gives you three things: a 'traffic sign recognition' system that pictures traffic signs as you pass and displays them on the dash; a 'lane departure warning' system that stops dozy drivers who might be veering out of their lanes on the highway; and an 'automatic high/low beam' system that automatically dips your headlights for you at night in the face of oncoming traffic.

With this pokier Blue dCi 150 diesel derivative, the running cost figures are just over 60mpg on the combined cycle and just under 120g/km on 17-inch wheels, though inevitably, that showing takes a hit if you specify the 4WD version. Even though the traction system in question is part-time and only gives you four driven wheels when low grip levels demand it, the extra mechanicals carry a 107kg weight penalty, which means that the running cost figures deteriorate a little.

Enough on efficiency figures; what about the other costs of running this car - depreciation for example? Given that Renault's previous contender in this category, the Koleos of 2008, shed value like a stone, potential Kadjar buyers might be forgiven for harbouring some concerns in this area. Apparently, though, they needn't worry. Independent experts CAP reckon that this fresh design will be viewed very differently by the market, thanks to good looks and that Qashqai heritage. As a result, lower-order versions may well retain up to 47% of their original value after the industry-standard three year/60,000 mile ownership period, which isn't far off what you'd get from established respected family Crossovers like Mazda's CX-5 and Ford's Kuga. Plusher Kadjars sit in the 42 to 45% bracket - still a very reasonable showing given Renault's relative lack of track record in this segment.

In summary? Well you could say that it would have been difficult for Renault to fail with this SUV, given the proven underpinnings it's based upon. The French brand though, has had the right ingredients for a car of this kind for some time but simply hasn't managed to blend them into the kind of finished product that buyers in this segment really want.

The Scenic RX4 of 2000 and the Koleos model of 2008 were both false starts in this regard but with this Kadjar, the pieces really seem to fit, especially in this top Blue dCi 150 guise. It may not be the 'ultimate urban adventurer' but it's the kind of car that really could add a more appealing dimension to family travel. 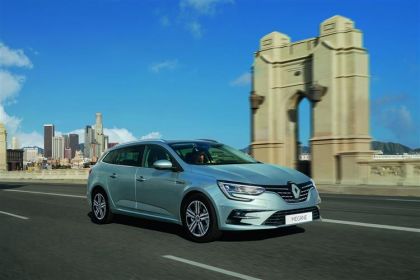