A BATTERY OF QUESTIONS

Volvo's first full-EV is the XC40 Recharge P8 Pure electric. Jonathan Crouch has a few things he'd like to clear up...

The XC40 Recharge P8 Pure electric is pretty much everything you'd expect a Volvo full-EV model to be. This fashionable battery-powered compact premium SUV features a state-of-the-art fully-electric all-wheel-drive powertrain that offers a WLTP-rated range of 249 miles on a single charge and an output of 408hp. The drawback is premium pricing but otherwise, a lot of boxes seem to have been ticked here.

You might be surprised that it's taken so long for Volvo to bring us a full-EV: the marque was, after all, one of the very first to popularise Plug-in hybrid electrification in its cars. Or, conversely, if you know the industry, you might be surprised that this Gothenburg maker is selling any kind of EV at all. In recent years after all, this Swedish manufacturer's Chinese Geely parent company has dictated that development of full-battery power should be largely delegated to Volvo's all-electric subsidiary brand, Polestar.

It seems not. Volvo wants (and needs in view of current European directives) to dramatically increase the sales percentage of its electrified models and that can't be done merely by concentrating on mild hybrid and plug-in hybrid engineering. Plus the XC40 sits on the same CMA platform used for the Polestar 2 model, so it was pretty straightforward to create a milkfloat mobility version of this little SUV. Mind you, with 408hp on tap, this car is a long way from milkfloat mobility...

As is now normal with crossover EVs of this kind, the electrified set-up gives you two electric motors - one on each axle to deliver the advertised AWD capability - and all of it works via the usual EV single-speed auto transmission. It's the same powertrain set-up you get in a Polestar 2, which in addition to the 408bhp figure we mentioned earlier (at 14,000rpm!) means a massive 660Nm of torque - more than a Nissan GT-R. There's a hefty 75kWh battery with a 249 WLTP-rated driving range and the P8 can take off from rest like a scalded cat (62mph occupies just 4.9s), though flat out, it has to conform to the 112mph maximum that Volvo now applies to all its models. Both that and the introduction of this EV (one of five to be launched by Volvo over the next five years) are both key parts of the brand's plans to reduce its per-vehicle lifecycle carbon footprint by 40% by 2025, as part of a long-term goal to become carbon-neutral by 2040.

Though in theory, this is an SUV, don't get any idea about venturing too far from a paved surface. Because of its underfloor batteries, this P8 model's ground clearance is down from the 211mm figure of a regular model to just 175mm.

The main visual difference marking out this full-electric P8 XC40 model is its blanked-off front grille, which is rarely a great adornment for an EV - and isn't here. That panel's there of course because there's no engine to cool. Pop the bonnet and what you'll actually find is a useful 31-litre 'frunk' stowage space. You'll find this a usual place to chuck the charging cables into so that they don't end up getting in the way of everything in the boot.

At the wheel, there are few giveaways to this Volvo's battery-powered remit, save for a few EV-specific electronic gauges. Delve into the workings of the central portrait-style 9-inch screen and you'll find that the infotainment system is powered by Android, which means you get a raft of over-the-air Google features, including Maps and YouTube Music built in. What else might you need to know about the cabin? Well because the XC40's basic architecture was designed to accommodate a full-electric powertrain from the start, there are no compromises over combustion versions when it comes to rear seat legroom. Or luggage space. Which is just as well because trunk capacity isn't huge, though the 460-litre capacity figure will probably be quite sufficient for the needs of most owners.

Unlike its showroom stablemate, the XC40 Recharge T5 Plug-in hybrid, the XC40 P8 Pure electric comes only in one trim level - 'R-Design', chosen because it's the variant that most Volvo buyers tend to select. We're confused by the fact that the brand doesn't offer a base-trimmed 'Momentum'-spec version which presumably could be priced to take the sticker figure below the £50,000 threshold for the current EV government grant towards purchase. Full-electric vehicles costing under this figure qualify for a £3,000 grant: but in 'R-Design' trim with a sticker figure of just over £53,000 from launch, the P8 Pre electric currently doesn't.

Still, you do at least get plenty of kit for your cash. 'R-Design' trim includes gloss black styling details including a contrasting colour black roof, plus diamond-cut or matt black alloy wheels, part-leather seats and aluminium dash inlays. As ever with Volvo, a key focus is safety. An autonomous braking system is standard-fit and this system can specifically detect people and animals. There's also an 'Oncoming Lane Mitigation' set-up that not only stops you from pulling out into the path of an oncoming vehicle but can also steer you away from such an impact. Pilot Assist, Volvo's innovative semi-autonomous drive feature, is an optional extra on every XC40, as is 'Run-off Road Protection and Mitigation'. And Cross Traffic Alert with brake support', which warn you of oncoming vehicles when you're reversing out of a space.

You're paying a lot more than you would for an EV in the Volkswagen ID.3/Renault ZOE/BMW i3 segment. But then you're also getting a bigger battery (75kWh) than would apply to cars of that sort, which ought to mean a more sensible driving range. We mentioned earlier that for the XC40 P8, this was WLTP-rated at 249 miles: to give you some class perspective, a mid-range 58kWh version of the ID.3 manages 261 miles, a 52kWh version of the ZOE manages 242 miles and the i3 records up to 223 miles. The fact that the expected driving range superiority doesn't really materialise here has a lot to do with this Volvo's quite prodigious kerb weight - 2,250kgs is a lot, even for an EV.

Charging times are competitive. Overnight charging via a home wallbox will occupy around 7.5 hours. When out and about, if you come across a 150kW public rapid charger, you'll be able to replenish from empty to 80% in just 40 minutes. Volvo is helping to incentive the switch to electrification by giving buyers credits towards their domestic electricity bill. If you were strategically able to use these, you might (theoretically anyway) be able to run your XC40 P8 free of charge providing your weekly mileage wasn't too great. Finally, we'll tell you that the warranty is the usual three year, 60,000 mile package.

The government talks about incentivising the sale of electric vehicles. But then progressively reduces buying incentives on them. Car manufacturers talk about wanting to increase the EV percentage of their sales: but then price full-electric models beyond the reach of most buyers. It's a conundrum. And for the time being, it doesn't show any real signs of being solved.

This XC40 Recharge P8 Pure electric model is a case in point. It's a very well engineered little electric vehicle. But it costs a considerable amount. And then there are the usual EV issues: not only that you'll run out of range but also that you might turn up at a charging point and find it's out of order - or there's a queue. Or perhaps you'll plug your EV in at night, then an hour later find out that you're required 150 miles away with only 80 miles charged into the battery. If a car like this is a second vehicle, as it will be in most cases, then these issues become less problematic. But until they're solved - and until prices become more accessible, cars like this, impressive as they are, will continue to be a rare sight on our roads. 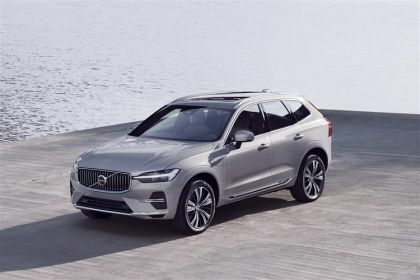